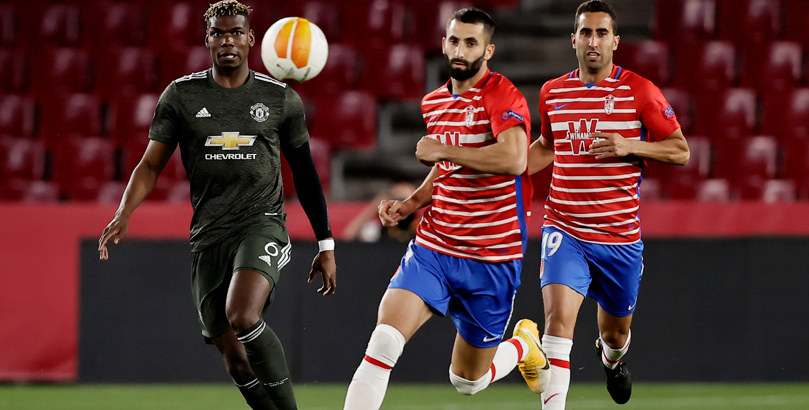 Manchester United enjoyed a relatively comfortable 2-0 victory over Granada in Spain and should again be too strong at Old Trafford.

However, they are without a trio of key suspended players, while their opponents may feel able to perform with more freedom now that the pressure is off them.

We’re going with 5/2 for a home win and both teams to score for our first Man Utd vs Granada prediction.

Yangel Herrera hit the woodwork for Granada from a tight angle and David De Gea easily dealt with a Kenedy shot from distance.

Bruno Fernandes went close after being set up by Daniel James and then just got the better of Rui Silva from the spot following a dubious penalty decision.

That outcome gave us a trio of winning tips, including a 7/1 correct score pay-out!

“We know how difficult it is to come to Spain to get a result like this and I’m very happy with the result,” beamed Ole Gunnar Solskjaer.

“Marcus and Bruno have been exceptional for us and are so important. We’ve created a good starting point for ourselves.”

That triumph was slightly marred by five yellow cards, though, with Harry Maguire, Luke Shaw and Scott McTominay now missing this match.

That could give the visitors hope of a fightback, but 5/4 for a home win and over 2.5 goals still appeals from the Man Utd vs Granada odds.

A Look At Granada’s Betting Odds

United have since impressed in a 3-1 Premier League win at Tottenham, but Granada also received a welcome La Liga boost when prevailing 2-1 at Valladolid on Sunday.

Evergreen 38-year-old striker Jorge Molina now has a dozen goals this season after netting in that match, having sat out the Red Devils clash.

Manager Diego Martinez felt his side deserved more from the opening leg and will urge them to live up to the club’s “eternal fight” motto at Old Trafford.

“We got more comfortable as the game progressed,” he commented. “In the second half, we deserved a goal.

“It was a shame not to have that clinical touch that would have given us the goal to give you the lift that you need.”

Granada have scored in six of seven Europa League away games this term, backing up our view that they can grab a consolation strike here.

However, they were beaten 2-1 when visiting both Napoli and Molde in the knockout rounds, so 15/2 for that scoreline to come up again is added to our Man Utd vs Granada betting tips.

Roma vs Ajax: Dutch giants could be worth sticking with
Slavia Prague vs Arsenal: Close contest on cards again
Author