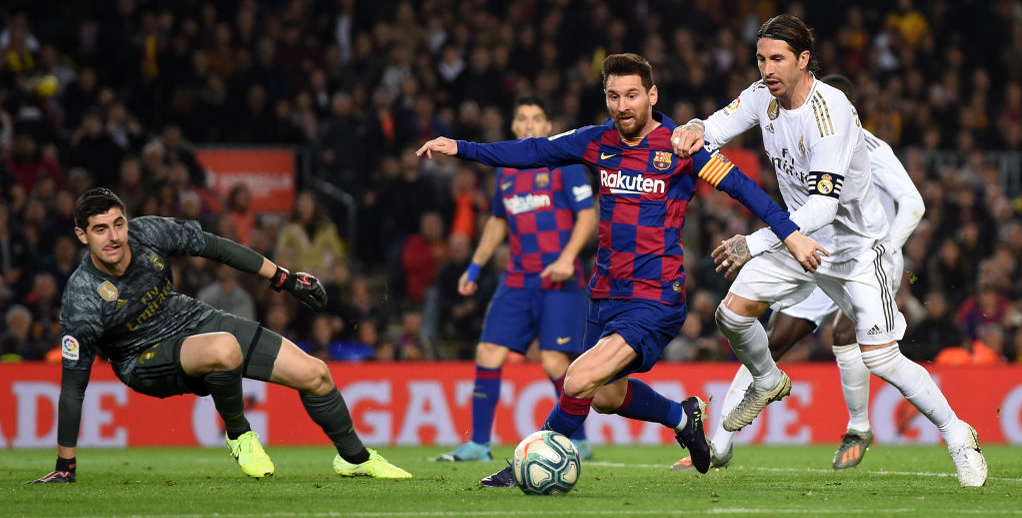 The second Clasico of the season takes place against a backdrop of midweek Champions League outings for Real Madrid and Barcelona which highlighted deficiencies for both teams.

Real Madrid took the lead against the run of play in their clash with Manchester City but conceded twice in the last 12 minutes to give themselves a mountain to climb in the second leg at the Etihad.

Barcelona’s paper-thin squad was a talking point for both Sergio Busquets and Ivan Rakitic after the 1-1 draw at Napoli, where Arturo Vidal was sent off a couple of minutes from time before Gerard Pique picked up an injury which has left him doubtful for the trip to the capital.

These teams shared a goalless draw at Camp Nou but the Spanish champions have won here on their last four visits, so a win for the visitors is a likely outcome at 39/20 as our first Real Madrid vs Barcelona prediction.

Real Madrid are one of three teams still unbeaten at home in La Liga this season, but they have not defeated their arch rivals in the past five meetings – seven if we include their two-legged Copa del Rey semi-final from the 2018-19 campaign.

Zinedine Zidane’s side lost top spot to Barca last weekend when they suffered a shock 1-0 defeat at Levante, where Eden Hazard also fractured an ankle, which could leave him on the sidelines for the rest of the season.

It was only the Belgian’s second appearance since November after recovering from another injury to the same ankle.

Zidane said: “It’s important he stays positive but, of course, it’s difficult. It’s a bad moment, it won’t be easy and he will feel like that for a while.

“I do not know if he will have to go through an operation. It is not my area and I don’t know if his season is over, but I hope not.”

Despite being unbeaten at home this season, Real have not been ahead at half-time in any competition since the first week of December and have been level at the break in nine of their 12 Liga games against teams in the top half of the table.

The first 45 minutes to finish all square is 13/10, but looking at the Real Madrid vs Barcelona odds, we favour no goals in that period at 23/10 as our second prediction.

Seven of those 12 games were 0-0 at the break and across all competitions five of their last seven did not produce a goal at the Bernabeu.

A Look At Barcelona’s Betting Odds

The champions, like Real, have not been totally convincing this season and their injury problems in attack have been a concern.

Luis Suarez underwent knee surgery in mid-January, which will leave him out of action for four months, and Ousmane Dembele will not be seen until August following an operation on the hamstring injury he sustained in training.

Those injuries prompted Barca to take advantage of a Liga rule which allowed them to sign former Middlesbrough striker Martin Braithwaite from Leganes outside the transfer window.

That would suggest Barca are desperate, but up front they still have Messi and Griezmann, who linked up really well in Naples.

However, the Catalan side have scored the last goal just once in their last six matches against sides in the top half of the table, so the hosts to complete the scoring wraps up our Real Madrid vs Barcelona betting tips at 3/4.